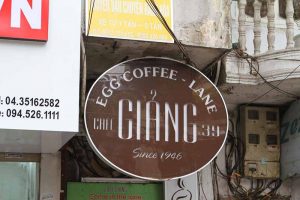 With bland chains taking over Hanoi’s café scene, ancient holes such as this one have become revered treasures. To be sure, Cafe Giang’s timeworn patina is almost a bleak exaggeration of communist-era non-chic.
Giang Café is humbly hidden on a small lane on Nguyen Huu Huan Street in the city’s old quarter. It may be difficult to find for visitors, but it is well worth the effort. It continues to be hugely popular among Hanoi’s coffee addicts with its special ca phe trung, or egg coffee.
Giang Café was founded by My Father ,Mr. Nguyen Giang in 1946, when he was working as a bartender for the famous five-star Sofitel Legend Metropole Hanoi hotel. Although the café has been relocated twice, its egg coffee recipe is almost the same as in its early days, with its chief ingredients being chicken egg yolk, Vietnamese coffee powder, sweetened condensed milk, butter and cheese.
The coffee is brewed in a small cup with a filter before the addition of a well-whisked mixture of the yolk and other ingredients. The cup is placed in a bowl of hot water to keep its temperature.
My father developed the recipe in days when milk was scarce in Vietnam. He used egg yolks to replace milk.

Whatever the time goes by, the coffee is pretty delicious mixed by the whole materials as eggs, milk, coffee that you will find them so amazing and unforgettable. The egg flavor is really fat, the coffee flavor are really both fragrant and bold. But the most important factor that make Giang Café unique and different from other restaurants is the formula how to measure exactly the fixed amount of eggs and coffee and the way to mix them perfectly that will decrease maximum the egg sickliness. Although there is a list of another drinks, egg coffee can be called as the best one and become best choice for Hanoi Street Food Tour Packages. 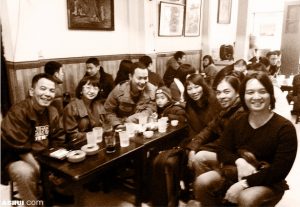